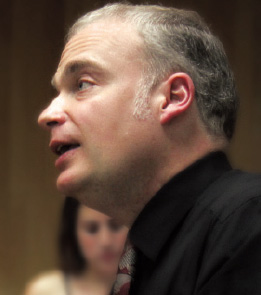 studied sacred music and choral conducting in Regensburg, where he was musical director of the Regensburger Domspatzen’s pre-choirs for ten years. In 2008, he became professor for “Singing with Children” at the Cologne University of Music. In the years 2009-2013 he also taught Choir Conducting. From 2010-2014 he was musical director of the German Youth Chamber Choir. Currently he is the musical director of the chamber choir vox animata and a member of the Artistic Council at the European network for professional chamber choirs TENSO. His freelance activities comprehend guest conducting, workshops and jury memberships in Europe, Latin America and Asia, as well as writing books about “Singing with Children” and a compendium to choral singing. Next to these occupations, Robert Göstl stays rooted in his home town Deuerling where he conducts a children choir and a mixed choir.